US outlines four scenarios for Chinese attack on Taiwan 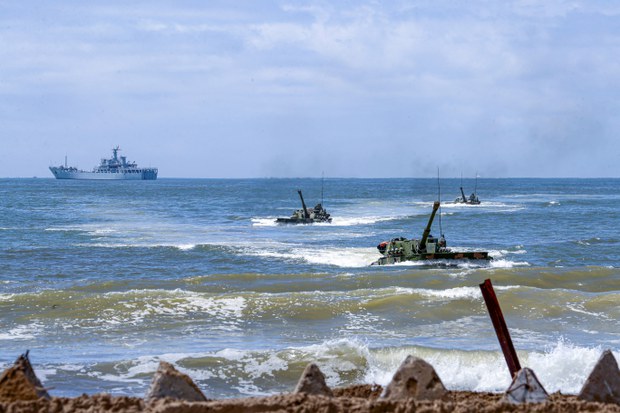 Over the past year, China’s People’s Liberation Army (PLA) “increased provocative and destabilizing actions in and around the Taiwan Strait” as it pursued Taiwan unification, according to a new report.

The U.S. Department of Defense released its annual China Military Power Report (CMPR) Tuesday highlighting Beijing’s ambitious goals and intentions as it aims to achieve “the great rejuvenation of the Chinese nation” by 2049.

The report laid out four possible military courses of action against Taiwan that the PLA may take in the near future, without giving a timeline.

The PLA could conduct “a range of options for military campaigns against Taiwan, with varying degrees of feasibility and associated risks,” it said.

The campaigns range from “an air and maritime blockade to a full-scale amphibious invasion to seize and occupy some of its offshore islands or all of Taiwan.”

The four courses of action against Taiwan mapped out by Chinese defense strategists, according to the CMPR, include an air and maritime blockade, a limited force or coercive campaign, an air and missile campaign, and a full-scale invasion.

During a joint blockade the PLA could cut off maritime and air traffic, stopping vital imports to force Taiwan’s surrender.

A limited force or coercive campaign could include computer network or limited kinetic attacks against Taiwan’s political, military and economic infrastructure to induce fear among the public. PLA special operations forces could also infiltrate Taiwan and conduct attacks against infrastructure or leadership targets.

An air and missile campaign could see precision strikes against key government and military targets, as well as communications facilities “to degrade Taiwan’s defenses, neutralize Taiwan’s leadership, or undermine the public’s resolve to resist.”

An amphibious invasion of Taiwan, the fourth scenario, could envision a complex coordinated operation to break through shore defenses, build up combat power along the coastline and seize key targets across the entire island.

The PLA “continues to build and exercise capabilities that would likely contribute to a full-scale invasion,” the Pentagon report said.

However, it warned that an attempt to invade Taiwan would likely strain the Chinese armed forces, invite international intervention and pose “a significant political and military risk for Xi Jinping and the Chinese Communist Party.”

The PLA, nevertheless, “is capable of various amphibious operations short of a full-scale invasion of Taiwan,” it said.

Invading Taiwan-occupied islands in the South China Sea such as Pratas or Itu Aba (also known as Taiping) or outlying islands like Kinmen or Matsu is “within the PLA’s capabilities.”

The PLA currently has nearly 1 million active-duty personnel, 340 ships and submarines, and over 2,800 aircraft.

The report did not provide any timescale for the four scenarios but said China “has never renounced the use of military force” against the democratic island that it considers a breakaway province.

The circumstances under which China has historically indicated it would consider the use of force include a formal declaration of Taiwan independence, internal unrest in Taiwan, Taipei’s acquisition of nuclear weapons and a foreign military intervention in Taiwan’s internal affairs.

However, the circumstances “remain ambiguous and have evolved over time,” according to the report.

An ADIZ is an area where civilian aircraft are tracked and identified before further entering into a country’s airspace.

Chinese warplanes entered Taiwan’s ADIZ on 240 days in 2021, the report said, noting that the ratio of advanced J-16 fighters in these operations increased throughout the year.

At the same time, the PLA conducted more than 20 naval exercises with an island-capture element, up from 13 in 2020.

Amphibious exercises also increased in 2021 with the PLA testing new platforms that could potentially play a key role in an assault on Taiwan, such as the Type 05 amphibious assault vehicle (AAV), which it used in large numbers for the first time in 2021.

The Congress-mandated report, officially titled “Military and Security Developments Involving the People’s Republic of China 2022,” follows the Pentagon’s National Defense Strategy launched two months earlier, in which China was identified as “the most consequential and systemic challenge to U.S. national security and a free and open international system.”