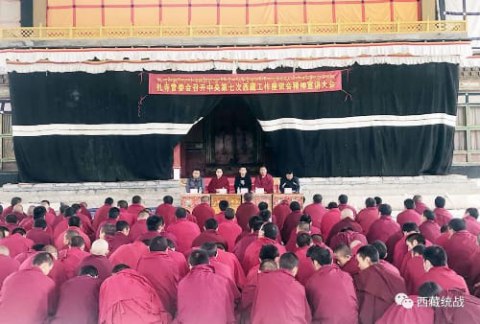 Chinese Government continues to crackdown on Tibetan thinkers by targeting, first by arresting them, lodging them in secret prisons for months altogether and finally sentencing them long prison sentences. All this has been done because these individuals spoke out in favour of their culture and rights which Chinese authorities term as an act of sedition and provide violence. For China, expressing views for preserving Tibetan language and culture is secession.

Chinese government, besides putting restriction on social media has placed a constant vigil and surveillance on Tibetan thinkers. Constant monitoring is undertaken to lookout for any view which is considered to be against Chinese Communist Party’s ideology. Such view falls in matrix of “endangering national security”, thus a case for detention and subsequent sentencing, often passed on, based on confession extracted after their sustained torture while in detention.

According to latest report of Central Tibet Administration, a famous poet and writer Rongwo Gendun Lhundup, has been handed over four years of sentence while writer Thupten Lodoe aka Sabuchey for four years (See chart). Notably, Gendun Lhundup has been tasked to translate Tibetan Buddhist scriptures into Chinese language. It has also been learnt that another thinker Rongwo Gangkar has been under Chinese detention. It is obvious that these decisions are aimed at suppressing the Tibetan intellectuals who seek the preservation of their identity. Similarly, Go Sherab Gyatso, Dhi Lhaden, Rongwo Gendun Lhundup, Pema Tso, Seynam, Rinchen Tsultrim and Kunsang Gyaltsen are facing wrath of the CCP for the same ‘crimes.

In detention the Tibetan intellectuals are further subjected to mental and physical torture forcefully tutored with lectures on ‘patriotism’ and hard labour. A large number of Tibetans are held in notorious Mianyang Prison of eastern Tibet for correcting their views in favour of CCP’s ideology.

It has been observed in the recent times, that a number of Tibetans have died either in custody or after their release from detention. These deaths are being attributed to custodial torture. According to Tibet.net, a Tibetan political prisoner, Choekyi, who was released from Mianyang Prison in January 2019, died in May 2020 prematurely. Obviously the death was due to torture and ill-treatment he faced in prison. Similarly, Tenzin Nyima, a young monk died in January 2021 due to torture he faced in custody. He was learnt to be released in October 2020 in very poor state of health. Chinese government easily washed its hands by claiming that the victims were not in their custody when they died.

The recent reports (June 21) of handing over sentences and detention of Tibetan scholars comes at the time when the UN observes June 26 as the International Day in Support of Victims of Torture to eradicate torture. China has also ratified the UN Convention signed in 1988. Bound by the principles of Convention China should to stop the torture of Tibetans thinkers and intellectuals which has assumed the proportion of an endemic. Chinese government should instead treat them with the respect and as human beings. Beijing should initiated investigations into all incidents involving torture and ill-treatment of Tibetans to provide justice to Tibetans and bring those to book who are carrying out inhuman acts.

Even though China refuses to allow international or UN mandated ‘Special Rapporteurs’, the UN should insist on access to Tibet to get first hand report of the civil and political rights situation. Consequent to China’s denial of entry into areas under its control, it has been able to draw an ‘Iron Curtain’ on its misdeeds, including torture and ill-treatment against Tibetans.

Finally, the Chinese Communist Party has to put an end to its policy of ‘cultural assimilation’ to Tibetans to appropriate their culture by way of arresting/sentencing their thinkers, destructions of statues and monasteries and denial of right of practicing their religion. The so-called policy of ‘cultural assimilation is actually the root cause of the Tibetan resistance being used as pretext for its crackdown.

75th Independence Day celebrated across Kashmir with joy and jubilation

The Communist regime of China wants to "change the status quo" in the Taiwan Strait, said the US Department of State on Monday. While...
Περισσότερα
English Edition

People in Kashmir were threatened to hoist flags: Mehbooba